Ok so we’re a little bit obsessive. In a good way. We have to be if we’re going to satisfy the most discerning of tastes. And make no mistake, that is why we’re here. So we source our high quality pork from the very best, British farms; and we ensure that our curing, roasting and packaging processes are the best that they can be. Seriously.

It started down the pub.

The Junction Tavern beer garden in NW5, to be precise. It was there, on one of their many lost evenings, that our founders George Rice and Johnny Bradshaw, found themselves pondering a serious question.

What would be the perfect snack to accompany their recently ordered pint of real ale and glass of red Bordeaux? It had to be a delicious taste complement to these fine beverages; but it also had to provide proper sustenance to power the boys through to their late dinner.

Several packets of crisps, nuts and scratchings later, the boys agreed that it had to be something more serious. They hit on the concept of a “Posh Peperami.” It could only be made with top quality British charcuterie, they decided.

This would be real food – satisfying, full of flavour and better for you than any existing pub snack. The very next day, Serious Pig was born. 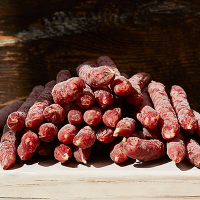 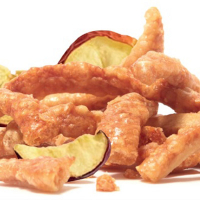