Did you know you can pulp and air-pop a whole carrot? So discovered James and George, 4th generation potato farmers, on their quest to find a wholesome alternative to traditional crisps. With a little ingenuity, and down to earth common sense, they perfected a way to create air popped chips from every last bit of a carrot, pea and potato. What they got was a crunchy, veggie snack that’s low in fat, with plenty of fibre and tons of taste.

At Wholesums HQ they always say ‘there’s no earthly reason not to dig in’ – and it’s true. Truth be told, there are absolutely loads of reasons TO dig in to a pack of your favourite flavour. After all, they’ve been working hard to make them as enjoyable as possible.

Wholesums are what’s known as popped chips. They came across the idea for them when looking for a healthy alternative to the usual suspects that tend to crop up in the crisp aisle of your local shop. Not that they’ve got anything against traditional crisps of course… it’s just that sometimes you need something a little lighter.

So, in their quest for something healthier we started with vegetables. Naturally. It wasn’t long until they found out that this technique of ‘air popping’ vegetable such as carrots, peas and potatoes makes for something that’s deliciously crunchy and highly snackable. What’s more is that they were able to put every little bit of vegetable to good use. So things like potato skins (actually the most nutritious part of the potato) and carrot stalks could be used and nothing that’s perfectly edible goes to waste!

So that’s the ‘science bit’ covered, ‘But what about the taste?’ we hear you ask. Well, flavour is another important part of the big picture. They know everyone’s got their own preferences and ways of doing things, that’s why they worked out not one but four delicious flavours for people to choose from.

If all this talk of taste is making you think Wholesums are too good to be true, well there’s no big, scary, unhealthy drawbacks to them. Quite the opposite in fact. They’re low in calories, a source of fibre and are low in saturated fat thanks to the air popping technique we use. Oh, and a whole load of vegetable goodness goes into each bag too! 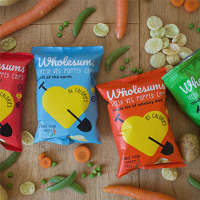 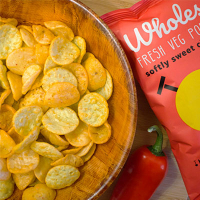 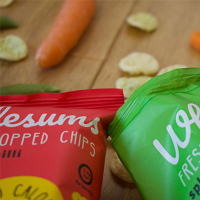